Australian authorities are investigating the declaration form provided by Novak Djokovic to enter the country.

Since the tennis star won his legal action against the cancellation of his visa, questions emerged about the form.

It comes as the Serbian player back to training on the tennis court, with photos showing him at Melbourne Park, the venue for the Australian Open – which starts Jan. 17 and for which Djokovic was named the number one seed. 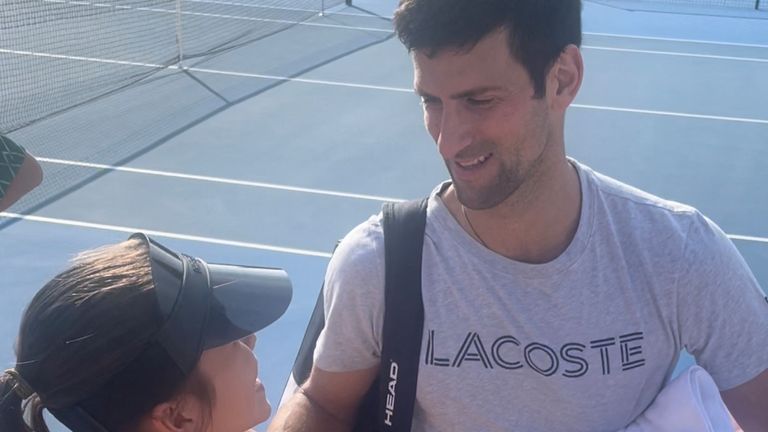 January 2: Djokovic pictured with a fan in Spain

The question for consideration regarding the entry form is whether the tennis player may have completed it incorrectly when checking a box indicating that he had not traveled in the previous 14 days. his arrival in Australia on January 6.

A social media post appears to show that Djokovic attended an event in Marbella, Spain during the period in question.

Separate photos also show the world number one in tennis during a training session in the country on January 2.

In addition, separate questions remain about Djokovic’s confirmed positive test on December 16 and his subsequent encounter with children at a public event in Belgrade the next day, which allegedly violated Serbia’s 14-day quarantine rules. after a positive test.

Sky reporter Nicole Johnston said: “In this form you have to list the countries you have been to in the past two weeks. He said he had not gone anywhere, but he did. turns out Djokovic was in Spain. “

Johnston, who is in Melbourne, said the problem with Djokovic’s declaration form “appears to be delaying any announcement” as to whether the government will decide to deport him.

Djokovic had been forced to stay at a Melbourne hotel after being stranded by border officials last week before the competition because he had not been vaccinated against COVID.

He said, despite what happened, that he would like to “stay and try to compete” at the Open.

However, Djokovic’s involvement is still in limbo as he awaits a verdict from the Australian government, which has said it is still considering another way to expel him.

Meanwhile, Djokovic’s visa dispute has been called “damaging on all fronts” by the Association of Tennis Professionals (ATP).

The men’s tennis governing body applauded the court’s decision overturning his visa cancellation, but called for greater clarity on the rules.

ATP said the situation highlights the need for “clearer understanding, communication and enforcement” of the requirements, adding that it strongly recommends all players to do so. vaccinate against COVID-19.

He said in a statement: “The ATP fully respects the sacrifices made by the Australian people since the onset of COVID-19 and the strict immigration policies that have been put in place.

“Traveling to Melbourne, it is clear that Novak Djokovic believed he had obtained a necessary medical exemption in order to comply with the entry rules. “The series of events leading up to Monday’s hearing was damaging on all fronts, including Novak’s well-being and his preparation for the Australian Open. “

ATP added that it “continues to strongly recommend” vaccination for all players, and 97% of tennis’ top 100 stars have already been vaccinated.

Australia has a policy prohibiting non-citizens or non-residents from entering the country unless they are fully vaccinated against COVID-19.

He allows medical exemptions, but the government argued that the unvaccinated Djokovic did not provide adequate justification for an exemption.

The court ruled that Djokovic had been treated unfairly by border force officers upon his arrival and ordered the cancellation of his visa canceled.

However, he did not say whether his exemption – based on the fact that Djokovic contracted COVID-19 last month – was valid.

Djokovic “has no right to be here”

Wimbledon quarter-finalist Marton Fucsovics has said he does not believe the world champion has the right to play in the tournament.

Speaking to Hungarian media outlet M4Sport, Fucsovics said: “People’s health is paramount, and there are rules that were set months ago, namely that everyone should get vaccinated – and Djokovic doesn’t. did not.

“From that point of view, I don’t think he would have the right to be here.”

The 29-year-old, who lost to Djokovic in the Wimbledon quarter-finals last year, also said news of the world number one’s exemption received negative reception among many other players.

Rafael Nadal has belatedly supported the decision, having previously hinted that his big rival was wrong in trying to enter Australia.

He will face a “difficult” week

Former Djokovic coach Boris Becker has warned the tennis player will face a “tough first week” at the Australian Open if he is given the green light to play, with many still out. anger at the decision to let him enter the country. .

Mr Becker, who coached Djokovic for three seasons from 2014 to 2016, told the BBC: “I’m sure there will be a few boos and whistles but he’s used to it.

“The crowd will be tough with him but every game he starts he’ll win the crowd and they’ll hug him again. But he’s going to have a tough first week.”

NYT: Fabrizio Romano: the prophet of the football market